Continuing to think back to my stay in Anacostia, S.E. Washington D.C. and connections to the Hill District (see Mr. Laing Goes to Washington), allow me to introduce an impressive operation, Olivia’s Cupca

kes. The store is a brilliant combination of tasty treats, economic and community development as well as an educational facility. Here you have all the principles of the Nguzo Saba wrapped up in one experience. My family came across Olivia’s as we were driving out of Anacostia to go to MD a couple of Saturdays ago. When I saw it, I had to bust a U-Turn to see what was up with this gourmet cupcake store, smack dab in the middle of the ‘hood. Once inside, we learned that Ms. Cindy Bullock began the store, along with Royelle’s  Princess Party Palace upstairs, as an opportunity to express her love for baking while showing her two daughters, Olivia and Royelle, how to run a business. Thus, Olivia’s Cupcakes and Royelle’s are providing real live spaces to teach all the elements of becoming an entrepreneur while providing the community with upscale deserts. The idea of creative deserts in this predominantly African American neighborhood, combined with a family taking education into their own hands and preparing children to run their own shops was powerful to see. But none it works without the cupcakes being delicious and they are with just the right amount of icing and moist cake… you go, Bullocks! Next time you are in D.C. go check them out at 2318 Minnesota Ave, S.E. Washington D.C. 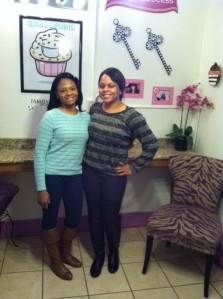 Olivia and Royelle at Olivia’s cupcakes

Thinking about the larger environment and its relationship to things that do and don’t happen in predominantly African American neighborhoods, it was interesting to me that around the corner from Olivia’s is another relative new operation, a grocery store that was once called Yes! Organic and is now called Fairlawn Market. The grocery store apparently got a $900,000 grant from the city and has struggled to be profitable, but I wonder what the support network in Anacostia is for long-time Anacostians like Ms. Cindy Bullock and small businesses like Olivia’s? The store helped give the neighborhood personality and in talking to Ms. Bullock and her daughters, I was learning about the history and culture of Anacostia. I will go back to Anacostia for that experience and as a person who is part of the Black professional class for the forseeable future, Olivia’s helps to make this a neighborhood I would want to go and live in. What are the opportunities for Hill District entrepreneurs, such as the folks at Grandma B’s, to open businesses in the redevelopment of this community? Hopefully as the Hill District changes it will include a heathy proportion of indigenous business ownership. In this way, the neighborhood maintains and develops its character as a predominantly African American community with a proud legacy, while offering the secondary benefit of making Pittsburgh a more fair, interesting and important city.

Last week on the sad occasion of the passing of my father, Clarence Laing (love you, Dad), I went back home to the metropolitan DC area. Because of my father’s illness, I have traveled back and forth between Pittsburgh and D.C. over the last month and a half and have felt a sense of foreboding in looking at DC and thinking about the Hill District. Washington is changing. Quickly. Buildings, posh restaurants and Dunkin Donuts are sprouting up everywhere and I see “White” people in places I never saw them before. Even places like where I stayed last weekend, Anacostia/Fairlawn, S.E. Washington D.C. (there is some debate as to whether Fairlawn is in Anacostia or is a separate neighborhood) Together, these characteristics serve as the sign of the feared and/or desired “G- word” (gentrification)

Growing up in Silver Spring, MD, if DC was “Chocolate City” then Southeast D.C. was “Dark Chocolate City” and, like the Hill District, the stories that were often told about it, usually by outsiders to outsiders, were of one form of deprivation or another. When Black boys met and played the “where you from?” card game, saying “Southeast.” was an Ace and saying “Silver Spring” was like a 4, or something. But, also like the Hill, Southeast D.C., one-time home of Frederick Douglass, has brought forth some powerful history and gotten stigmatized by the nightly news, more so than its daily life. So, last weekend, I was kind of bugging off the fact that my wife had booked a weekend stay in Southeast, D.C. (apparently I had been told in advance, but hadn’t listened).  A weekend stay across the Anacostia River? To my mind, just imagining that this part of D.C. could be a place for tourists to want to stay was a bit of a shocker, but I wasn’t hip to a trend that apparently is pretty strong and that is airbnb.com. The online comments show folks from all over the world. I had an interesting texting conversation with the owner of this house, Norman, and he expressed 1) Anacostia has gotten a bad rap for too long; 2) There are some interesting demographic changes; 3) Racial diversity is not necessarily a bad thing for the hood. We really enjoyed our stay and if my mother’s house get’s tight again, we will definitely go back. I just talked with a fraternity brother of mine and he has a friend stay with him for short periods of time while she rents out her upper East Side New York house for periods up to as long as a month. I checked to see if there are Hill District houses on this website and even found one in the Sugar Top section. Apparently this is going on in cities all over the country and with the economy and hotel costs what they are, this will only grow. I was saying to my wife we may want to put the house we now rent out on annual basis on airbnb at some point in the future. What impact might this have on a street? On notions of neighborhood and community?

What does all this mean for the Hill District and my sense of foreboding? Pittsburgh is no D.C. and thus the Hill District is no Anacostia. So, we are not talking an apples to apples comparison. However, I will say that soon after we crossed the bridge into Anacostia there were signs for ONE BEDROOM HOUSING-COMING SOON that put me in the mind of the Hill (see my earlier post on The Residencies at New Granada  Square). But, what is my role in gentrification as a Black person in the professional class who has bought two homes that were built by non-profit community development corps as part of a redevelopment strategy?  Not long after we purchased our home on Dinwiddie St. there was an article in the New York Times, arranged at least in part by the Hill District Community Development Corporation, titled “Revival for a Black Enclave in Pittsburgh” that discussed our family and quoted me in the context of what was then a new phenomenon of “Black gentrifiers”. Interestingly, my wife, born and raised in Hill District public housing, didn’t fit this frame and was not included in the story. Towards the end of the article this trend of Black gentrification was juxtaposed with a quote from a young, unnamed Black man saying “Ain’t none of this got nothing to do with me”. I wonder if this young man had his own sense of foreboding.