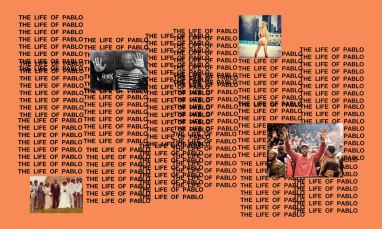 A few days ago I was on TIDAL, the struggling music streaming company owned by Jay Z, listening to Kanye West’s “The Life of Pablo” (TLOP) and I came across this piece,“Kanye Unfinished: The Evolving Life of Pablo”, about how Kanye’s ongoing changing of “The Life Of Pablo” shows him to be of a quality and insight that puts him among artists of the (White and mainly male) Western Canon, particularly those who’ve seen art as an always unfinished product.  I was all excited about my art insight & set to post it to my facebook page when I reflected on the fact that I had come to the article clicking “Kanye” on TIDAL, which was originally the only way to listen to TLOP, unless you pirated it (which a 1/2  million people did). What gave me pause after pressing “share” and starting to write a little context for the post was that the comparison of Kanye to the artists of this Canon felt eerily familiar to Kanye’s ongoing positioning of himself as Shakespeare and Warhol . So, was this a thought piece or the secret marketing where the poster exclaims to us something that the company has told them to tell us (real buttery taste!)? And if it’s a placed message (I just doubt TIDAL is posting blogs that could set Kanye off because the only incentive to get TIDAL right now is Yeezy) why aren’t any of artists that Kanye  is being compared to of African descent?  By comparing himself just to  white male artists and reminding us of “The Canon”, Kanye adds to the arts industry’s marginalization of Black male and female voices as well as ALAANA (African Latino Asian Arab & Native American) women and white women artists.  It’s hard for me to believe that that hasn’t occurred to Kanye and that bugged me enough to not want to post it. But rather to say something more about it.

At the same time it bugs me, Kanye is too special to dismiss. There is still something special & brilliant about Kanye challenging “the arts” industry by saying a Black male hip hop artist, married to a Kardashian, talking about his dropoutness and his dark twisted fantasies and designing sneakers and calling out billionaires on Twitter is more than worthy of the company of the “canonical” artists. That’s kind of revolutionary in and of itself, right? That’s a Black man taking on his internalized inferiority  , right? However, as he  scales the walls of race/hip hop by showing us he belongs on the pantheon of what we’ve been told our whole lives are the all-time arts greats, he heightens those walls for himself and the rest of us by reemphasizing the idea that white male artists are the true measure of whether an artistic practice is innovative.  For example, by definition jazz is also an ongoing, evolving artistic product, but at its height they didn’t have the technology to change albums once released. Still, John Coltrane, among others, is surely an ongoing genius tinkerer, right? Kanye’s choice to show us who he is by comparison to others brings to my mind Zora Neale Hurston’s comment “I feel most colored when thrown against a sharp white background.” Does she mean she felt most visible? Or most invisible? I’m curious. But, unlike Ms. Hurston who shows us the violence of racialization by pointing out how she is thrown against this sharp white background, Kanye seems throw himself against this background to be sure we see him. But in this case, I don’t see him, rather I see the (White, mainly male) Western Canon and the artists Kanye (errr TIDAL blogger) is not mentioning. So, while I both really admire Kanye’s courage to do what he feels he has to do to be seen, I also feel some kind of way about his lack of interest in making sure other Black artists are seen. I also think it’s a bad strategy. No matter how bad we are (“not bad meaning, but bad…”), we can’t take on white supremacy by ourselves.

But I don’t want to get too twisted up in feeding the pop culture monster and miss a chance to celebrate an artist I actually know who is here in Pittsburgh, among other places, directly taking on this question of Black visibility and that is Kilolo Luckett. Kilolo, invokes for me the memory of El Hajj Malik El Shabazz (Malcolm X), with the title of her  “By Any Means” Project (BAM),  opening in Pittsburgh this month with both an exhibit and symposium.“BAM seeks to address black artistic (in)visibility in Pittsburgh through a strategic convening of arts workers and stakeholders that will spark debate, constructive dialogue, and positive growth to our regional cultural institutions and visual arts community nationally and globally.”  BAM will feature an exhibit by an artist named Nathaniel Donnett opening April 22nd thru May 22nd at 709 Penn Ave, as well as a symposium to take place April 23rd in the Carnegie Lecture Hall from 10 am to 3 pm, with one of the talks being a panel on “Black Art Making in the 21st Century”. BAM is a project supported by Advancing Black Arts in its  “Advancing the Field” category, a funding initiative of The Pittsburgh Foundation and The Heinz Endowments. I worked with Kilolo in my capacity as Senior Program Officer for Arts & Culture with The Heinz Endowments. Looking forward her latest response to (in)visibility. I actually think a conversation between the two of them about art & (in)visibility would be fascinating.