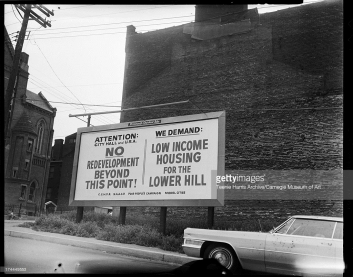 Thanksgiving Day and sickened and angry about the physical, cultural, economic violence being perpetrated by Energy Transfer Partners against the #StandingRock Sioux Tribe and the more than 300 Indigenous tribes and other peoples standing with them as they prevent the building of the Dakota Access Pipeline. Thinking about the organizing against DAPL in relation to the Hill District takes me to when the Hill District and folks like Ms. Alma Speed Fox organized to say “no further” in response to the Urban Redevelopment Authority’s forced removal of residents and businesses from the Lower Hill. The removal and redevelopment stopped and thank goodness, if it hadn’t been stopped I might not even be here writing this post. 50 years later the entire effort delivered almost nothing on its promises and had to be “fixed” by having its development rights essentially given to the Pittsburgh Penguins, so that they would not leave.  About ten years later there’s still really no development on the Melody Tent site in the Lower Hill. To make a contribution to support the protesters, here is a link to support those at the Sacred Stone camp. They have been there since April. #NoDAPL