Snuck into the Hill District Consensus Group (HDCG) meeting yesterday having missed the update on the grocery store, but did get there in time to hear Dr. Emma Lucas Darby, HDCG board member, make the following announcement:  as part of the Community Benefits Agreement negotiated by the One Hill Community Benefits Coalition, there is a college scholarship available for youth living in the Hill District. Dr. Darby also announced that on November 11th at 5:30 at the there will be an information session on how to enroll in college. For both topics, please follow-up with the HDCG. The meeting closed out with Mr. Carl Redwood saying “30%, 20%, Curtain Call and Dollar-A-Car”, which is a chant for the Lower Hill and represents “30% affordable housing, 20% businesses run by folks from the Hill District, the public art project “the Curtain Call” and that the Penguins should give a dollar a day for every car that pays for parking in the “Lower Hill” to a fund to benefit the Hill District. On the way out I spoke with a woman living in Crawford Sq. who is working on opening a new business and not sure where to place it and she was not aware of what the 20% reference signified, so the need to educate and organize continues.

Last night went to the Ujamaa Collective’s (UC) Open Mic and got to hear the second half of the evening’s inspiring and complex poetry from the likes of Joy KMT, Bekezela Mguni, a young MC whose name I didn’t capture and was spitting fire, Louis Collier with a recently released book and had the crowd laughing with a poem called “white girls”, the UC’s Executive Director, Lakeisha Wolf, Erin Perry, a brother who did a powerful piece on the Memphis Sanitation Workers strike of 1968 and Hotep The Artist making the audience think about domestic violence, birthing and other pleasurable experiences you can read about on Hillombo Uncensored. The evening’s featured poet and the H.I.’s own, Kim El, blessed the audience with a few of the monologues from her upcoming show “Straightening Combs”. Kim El will present Straightening Combs October 26th and 27th at the Hill House Association’s Elsie Hillman Auditorium, so be sure to come out. The baby of the bunch, I was even inspired to enter the circle and add a couple of poems (with hands shaking so bad I thought I might drop my phone). Unfortunately, I missed Ms. Renee Aldridge and a number of others who shared before I arrived. The affair ended well after midnight and folks were still hanging around and lingering is always a sign folks enjoyed themselves. If anyone can write in and add the names of folks from the first half of the evening and the folks whose names I missed, I’d be mighty obliged. 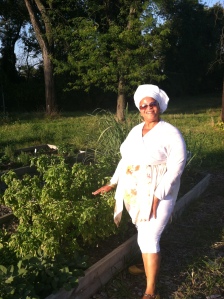 Celeta showing off the Ujamaa garden

This past Saturday stopped by the Ujamaa Collective’s Community Cook-Out being held on Francis off of Bedford and got a chance to see longtime artists Bro. Tony Mitchell and Iya Bea Mitchell holding it down on the djun-djun and djembe, respectively. Also recognized on the djembe, Bro Shabaka Perkins of Point Breeze’s Sankofa Village. Ujamaa Collective’s Executive Director, Lakeisha Wolf was getting her African dance groove on as was one of Ujamaa’s Founders, Celeta Hickman. Also spoke with Mama Kadiatou of the African dance company, Balafon and Erin Perry of the Legacy Arts Project (I work with Balafon and Legacy Arts in my capacity as a Program Officer at The Heinz Endowments, but I do not write this blog representing the foundation) who also stepped out and showed a few steps as a master dancer from Guinea. Maybe most nourishing was seeing the youth and children excited to dance with friends and teachers simply for the joy of it.

Celeta took me up to see the garden where zucchini, peppers and lemongrass are being harvested and talked of the challenges they have had with deer jumping the fence that protects their crops, but how a little straw can serve as a good foil for these four legged friends. She also talked of how they have had to stop other municipalities from dumping on this property and the help they received from Councilman Lavelle in this regard.  Located on 1901 Centre Ave, the Ujamaa Collective is a non-profit organization of women of African descent who are entrepreneurs, artisans, artists and individuals who are committed to serving their community through leadership. In the birthplace of August Wilson and Rob Penny (love, light and progress to their sprits), it was nice to see an event, organization, artists and community members connected to one another by intentionally living African culture in the Hill District. That Ujamaa has ideas about how this culture connects to larger questions of redeveloping the community through urban gardening, entrepreneurs and the organizing of women of African descent makes it all the better.